View basket “Atra Haeresis – Petrium [MC]” has been added to your basket.

Atra Haeresis is an international death/black metal project, performed at the intersection of the styles of the Scandinavian and European ancestors of the genre. The material absorbed the graceful power of brutal riffs, full of melodic lines, filigree united by the atmosphere of chaos. Collaboration of musicians from such projects as Ethir Anduin, Obscuration and НАВЬЯРA allowed the material of ATRA ANDUIN STUDIO member to be released into the “PRETIUM”. The debut album is the quintessence of thoughts of such topics as: misanthropy, philosophy, history. Therefore, the material is filled not only with a rich musical component, but also with serious lyrics. Cover artwork by Vladimir ‘Smerdulak’ Chebakov .
Line-up:
Alexander Dorokhin – music
Sergei Ambrazevich – vocals
Alexander Antygin – guitars
Alexey “Fenrir” Veselov – bass
Guests:
Alexander Zaremba – drums (track 1)
Fucker – solo guitars (track 5)
Luka – vocals (track 6) 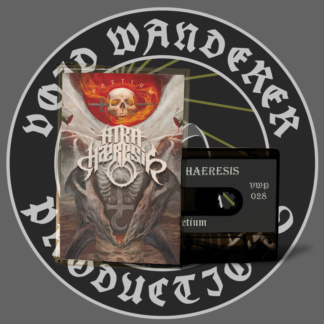