PRE-ORDER, to be released on the 15th of september!

On September 15th of 2021 the Dutch one-man black metal project by Devi Hisgen will release a brand new work consisting of five songs. Devi is already known for making experimental music with Cthuluminati and fans can expect something familiar yet very much following its own twisted path. Devi’s time spent writing in lockdowns has resulted in a completely absurd twenty-two minute trip into dark and mind-bending worlds.

With lyrics about dark scientific theories and dissonant melodies, Vákuum is a true ode to the void, a well-articulated piece of abstract art. Although Teitan truly is an entity on its own, the work fits really well into the worlds and works Devi has tied his name to. This concept for avant-garde song writing drew the attention of both Void Wanderer and Onism Productions, and since Teitan was the first band ever to release material on Zwaerdgevegt Records, it was agreed that all three labels will release the EP. Do not expect an easy listening experience, but if you are into bombastic and hypnotizing black metal, you might be in for an ominous treat.

Be the first to review “Teitan – Vákuum [CD]” Cancel reply 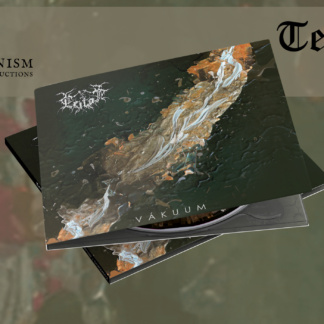