There were a few complications during the recording of the Spiritual Eclipse album. Drums were recorded between 18. – 26 .5.2016 at the A-ZYL Studio. All vocals, guitars and bass were recorded at the rehearsal room of Sekhmet during the dates 30.5.2016 – 26.6.2016. Mastering and mixing was done in the Kraken Studio Ljubljana in July and August 2016. Intro Eclipse and other orchestral instruments were composed by Stepa. Spiritual Eclipse is a conceptual album, and all of its lyrics were written by Agares. The main structure of all songs was composed by Set with big help of Stepa and Warlord. Their contribution added the true face of the new album.

This music is dedicated to our friends, who supported us and who have influenced us. We would like to mention mainly Zdenek ,,ULVBERTH” Hlisnikovky, Trond ,,NEFAS” Brathen and Vladimir ,,VLAD BLASPHEMER” Dedek. 666 Hails to you!!!

Special thanks go to Stepa, because he produced this new album of Sekhmet. We are really satisfied with his work.

For the whole era of her existence, SEKHMET walks her path that she has chosen at the beginning of times. Not enemies nor glory nor wealth did force this beast to abandon the path of hatred. She still holds her sword above the surface of the underground with pride, and she sets her shield against all traitors, trends, gold and false glory, which can infect mighty bodies of beasts as a virus and turn them into feeble carcasses.

We do support the Black Metal underground with our music, and we turn our faces away from the current trend.The dark waters of the underground have to stay drowned in the depths of darkness and Evil, the essence of which remains a mystery to us all.

SPIRITUAL ECLIPSE raises a huge black storm in the waters of the underground in the attempt to extinguish this flame of commercial trends! From Darkness to Darkness!

Stay proud! Do not forget your path! Stay real underground!

Only 2 left in stock 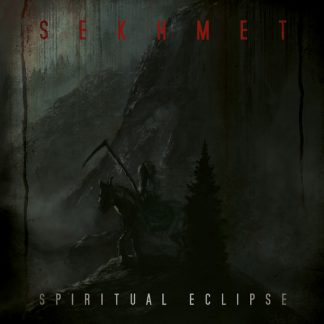